[The Korea Times]20160325 Businessman to turn stone museum into cultur…

Chun Shin-il, chairman of tour and logistics business operator Sejoong, never thought of opening a stone museum before encountering a Japanese customer at an antique store back in the 1970s.

“The Japanese stone collector was bargaining with a storekeeper, and the owner sold traditional stones at a high price,” Chun said in an interview. “It drove me crazy to see our cultural heritage sold to a foreigner. That’s when I first got interested in collecting stones.”

As his business prospered, he couldn’t resist a growing craving to buy and collect more stone cultural assets. This led the 74-year-old businessman to open the Sejoong Museum, the nation’s first-ever stone gallery in 2000, in Yongin, Gyeonggi Province.

Running the museum for about 15 years, the Sejoong chief wanted more foreign tourists and expats to set foot on the museum and enjoy Korea’s cultural assets. Toward the end, he believed the museum should be located at the nation’s capital city.

“Last year, I opened the Korean Stone Art Museum in Seoul, allowing easier access for foreign tourists and expats,” he said. “Each stone exhibited at our museum has its own symbol of our ancestors. I am sure people from a different culture have a special experience by comparing symbols of Korean stones with their own.”

The museum is located in the Seongbuk area of northern Seoul, which is gaining traction as the nation’s next cultural cluster due to the government-led “Museum Street” project. The stone gallery currently exhibits some 1,250 stone heritages.

One notable aspect of the museum comes from a “storytelling program,” with curators explaining visitors the historical background and symbols each stone brings with it.

He cited the “Road to Success” as an example. The trail outside the museum is packed with such exhibits that contain historical connotations of success.

“Entrepreneurs and parents whose children prepare for the College Scholastic Aptitude Test visit the road while enjoying our ancestors’ wishes,” Chun said.

The museum has six exhibition themes, with each having a special symbol. They include “Tomb Guardians Who Crossed the Sea to Korea” and “Village Guardians with Faces of Korean People.”

In particular, the latter is meaningful as various interpretations can be made about the stone sculptures there, he said.

Korean ancestors placed Jangseung, or village guardians made of stone, on village boundaries in a belief that they would frighten away demons and ward off evil spirits.

Each town made its own version of Jangseung based on their common desire, not bound by a specific format.

“In particular, the Village Guardian with Pipe dates back to the Shilla Dynasty (57 B.C.-A.D. 935),” he said. “Our ancestors at that time believed that playing pipes would subside waves, helping relieve their anxiety. Seaside villages carved pipes on Jangseung in this historical context.” 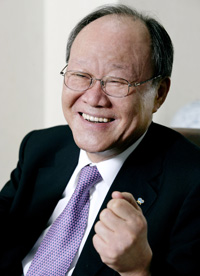 Chun is also seeking to become a frontrunner to redeem stones stolen by Japan.

In 2001, he brought back 70 stone heritages on his visit to Japan, 47 of which are on display at the museum.

“As far as I know, there are thousands of stone heritages at museums in Japanese cities such as Tokyo and Kyoto,” he said. “I will keep doing my best to win over the Japanese and return our heritages to Korea.”

The museum could serve as a connecting point to spread awareness of the nation’s stone culture, he said. This will allow us to get deeper into research on stone culture, offering more opportunities to bring back such stolen cultural assets, he said.

He stressed the fastest way to reach the goal is more “interest” in the area.

“Growing numbers of people and organizations are paying more attention to retrieving our cultural properties,” he said. “More tangible achievements can be made through continued efforts from individuals and the government.”

Toward the end, Chun is planning to hold a series of international conference with a group of stone culture experts at home and abroad.

“We have offered lectures and seminars for a more systematic approach to historical, religious and cultural studies of stone culture,” he said. “To expand our global footstep, we will soon hold an international conference.”

The museum will also run a scholarship and funding program for researchers in this field.

Backed by such efforts, the museum has built strong visitor loyalty.

“More than half of our visitors have signed up for a yearly membership since we opened in last November,” he said. “Considerable numbers of them visit again with their acquaintances. The word-of-mouth effect is the driving force to promote the museum. We are seeking to attain a higher foothold among foreign expats and visitors as well.”

The museum is not all about the history and culture. The stone gallery is seeking to take advantage of the state-of-the-art technology by teaming up with Google.

“Google has recently taken panoramic views of the stone heritages of the museum,” he said. “The digital content will be available in the second half of this year.”

Anyone in the world can zoom in all the exhibits and enjoy the museum’s general views through Google Street View, he said.